Throughout this time, we’ll be focussed on doing everything we can to support our clients and community, and to bring you safe events and catering deliveries. We'll be frequently updating this section with more information as the situation develops.

"Now, weddings can continue to be conducted where it is just the couple, the celebrant and the witnesses. That's no more than five people and the four square meeting rule has to be observed within the venue in which that is taking place. But, large gatherings for weddings, sadly, won't be possible under these new arrangements. And sadly, also, and I know this will be very difficult, funerals to no more than 10 persons observing the rules around the four square metre rule and the social-distancing practices. Particularly on these types of activities this is not an easy decision. Where we have already found, and Dr Murphy can speak to this, some of the events that have been some of the major transmitting events, it has been exactly these types of events, particularly weddings. And that is why, regretfully, we have to be able to put these arrangements in place. Now, these are the rules and arrangements that are applied when it comes to the strict enforcement of these arrangements and that will come in from midnight tomorrow night and states and territories will be moving tomorrow to put those arrangements in place." - Prime Minister Scott Morrison

Limits on organised gatherings Employers and event organisers need to be aware of the new restrictions for indoor and outdoor gatherings. These restrictions are to reduce the risk of spreading COVID-19.

Four square metre rule for inside gatherings. This was flagged this yesterday, but indoor gatherings just got more strict:

"But what we are now moving to is an arrangement for gatherings of less than 100, is that they would be four square metres provided per person in an enclosed space, in a room. So that’s 2m by 2m. Now, in addition to that, you should continue to practise wherever possible the 1m or 1.5m of healthy distance between each of us, to ensure that we are limiting the contact and limiting the potential for the spread of the virus."

Prime Minister Scott Morrison has declared a national human biosecurity emergency and announced a ban on all non-essential indoor gatherings of more than 100 people.

Upcoming bans on non-essential mass gatherings over 500 people that will be enacted from Monday 16th March.

“It is precautionary. It is getting ahead of this to ensure that we can minimise the impact on your health and [so] we can ensure with confidence the ability for people to be accessing the health services that they and their families will need.” - Prime Minister Scott Morrison

The HostCo team have all undertaken COVID19 - The Novel Coronavirus training through https://covid-19training.gov.au/

We can come to you with a range of delivery catering options, including special delivery requests like no-contact experiences. Check out our current menu here

There’s still a lot to learn about COVID-19, but we know for sure that maintaining good hygiene is absolutely critical. We practice this religiously day-in and day-out as caterers with a NSW Government Food Authority 5⭐Star Hygiene Rating, regardless of the situation. We’re continuing our good food hygiene practices and following the guidelines from the World Health Organisation too:

We’d usually advertise the Refectory as the perfect space for events with 180+ attendees, however given the current situation it’s the now an ideal venue for events with 50 attendees with space for social distancing (4-square-metre bubble per person). We’ll be ensuring all venues are set up with virtual capabilities so you can virtually include speakers and other attendees too.

We’ve reduced the capacity for these rooms down to 14 attendees.

If you want big, we’ll go big. If you want subtle, we’ll tone it down. Catering to every corner of the university and anywhere off-site, we work hand-in-hand to deliver distinctive, one-of-a-kind occasions. 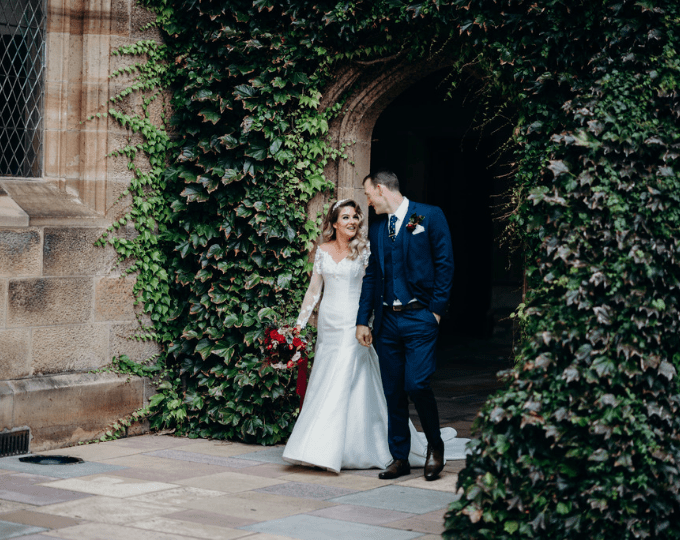 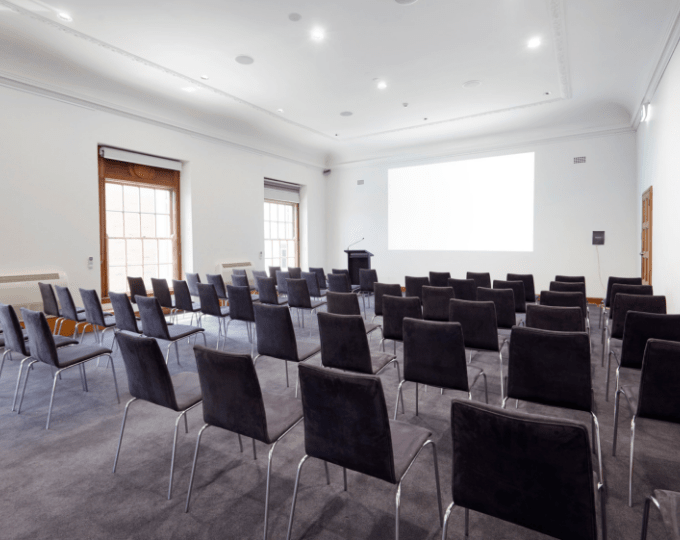 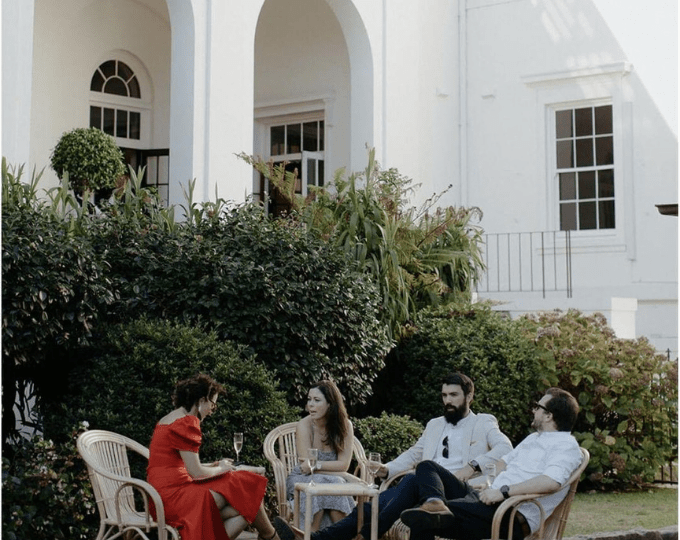 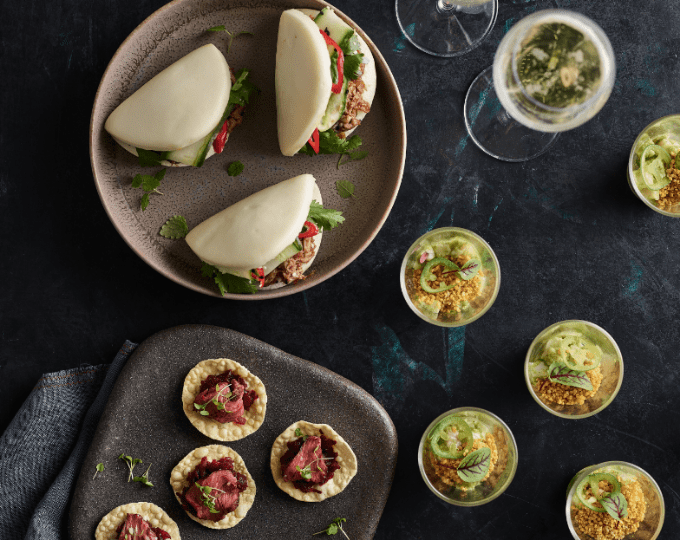 Catering That Comes to You

We’re all about versatile menus that bring the yum – every time. Wherever the location of your event, we deliver fresh, contemporary catering that does the local produce proud.

As a gold license caterer, our menus compliment and elevate your event. From canapes to seated, we’ll flavour your occasion. 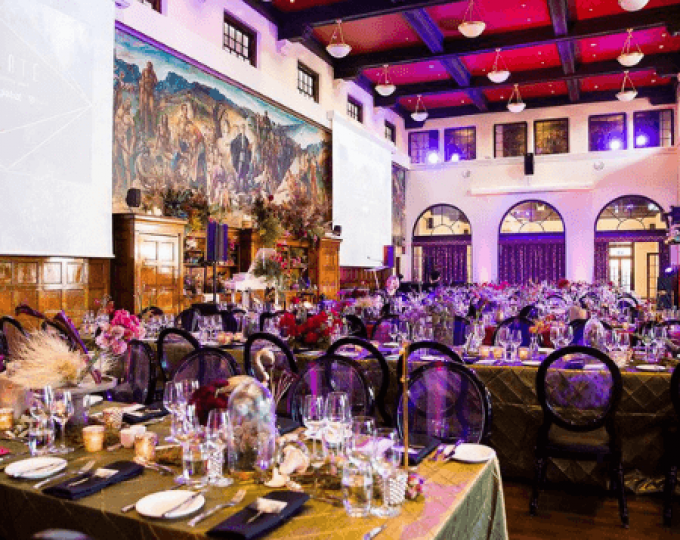 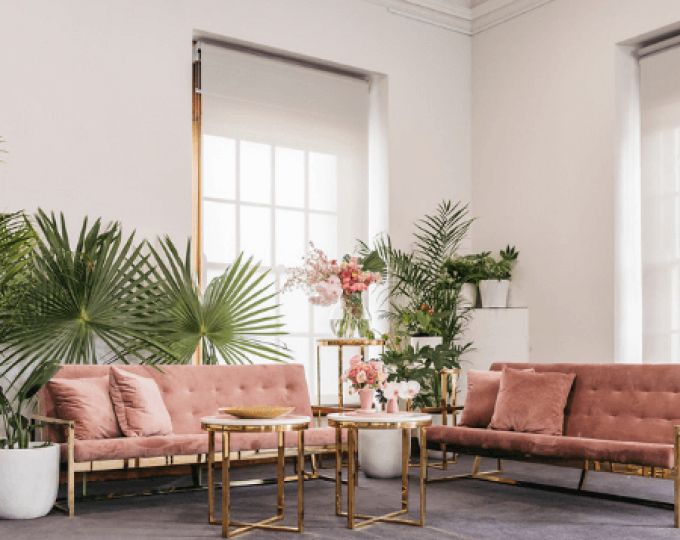 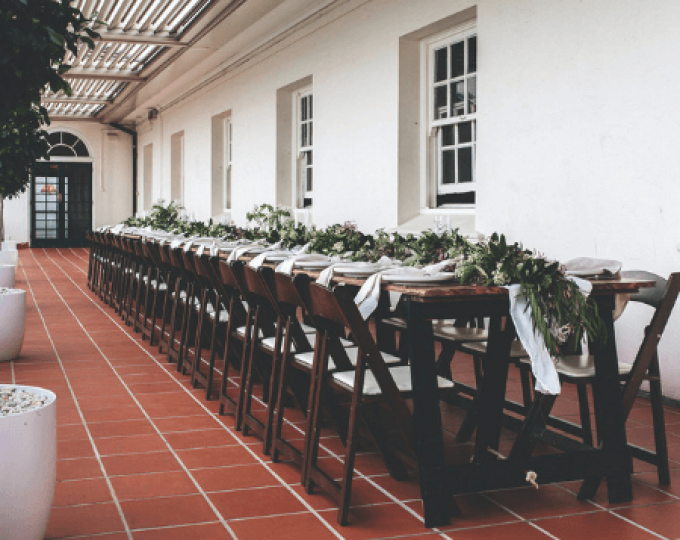 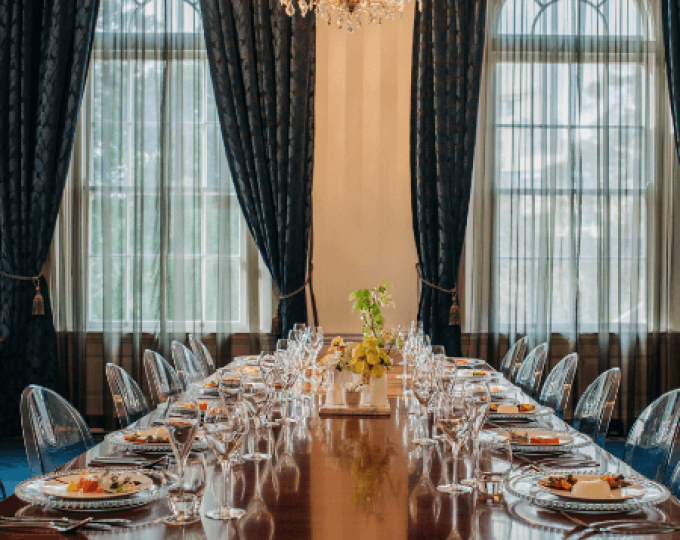 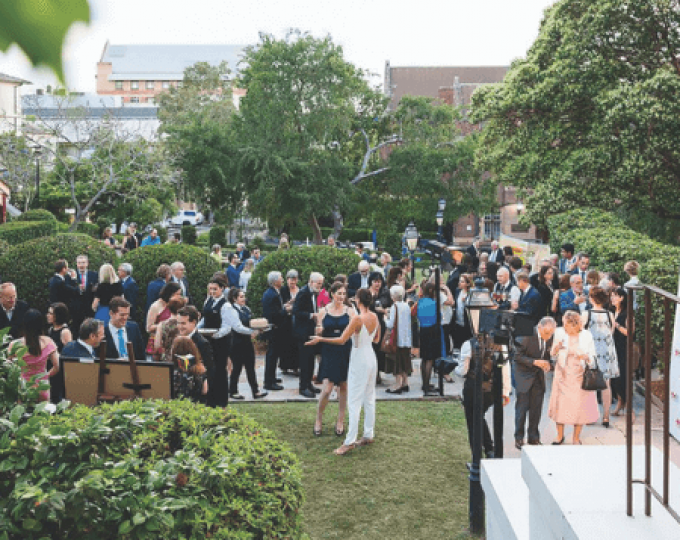 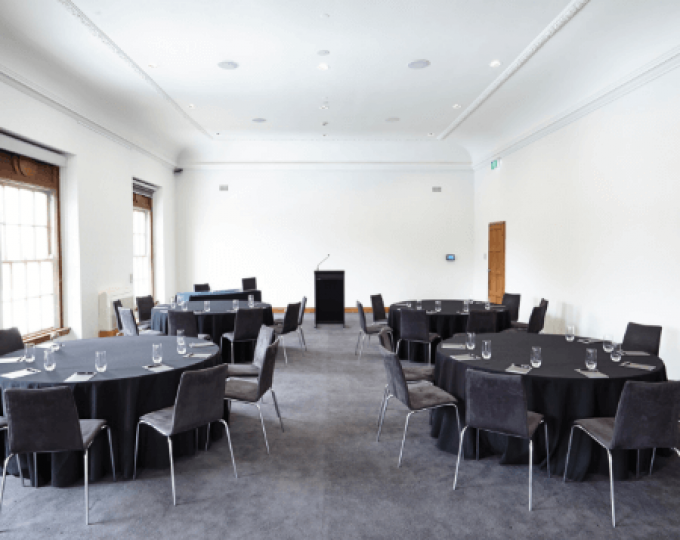 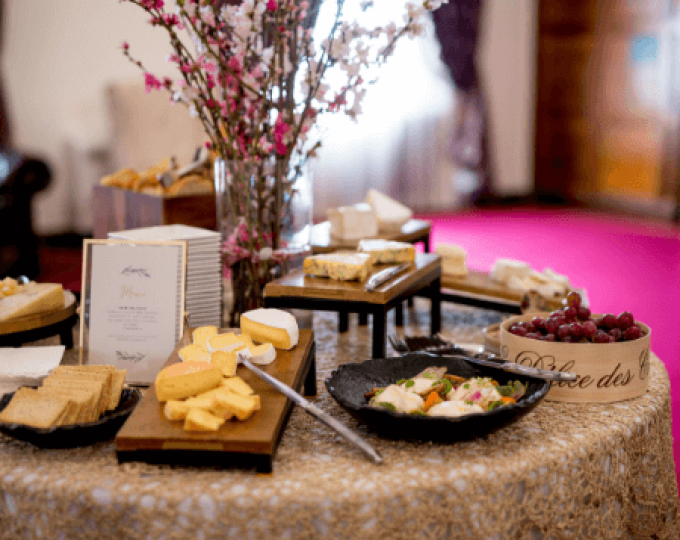 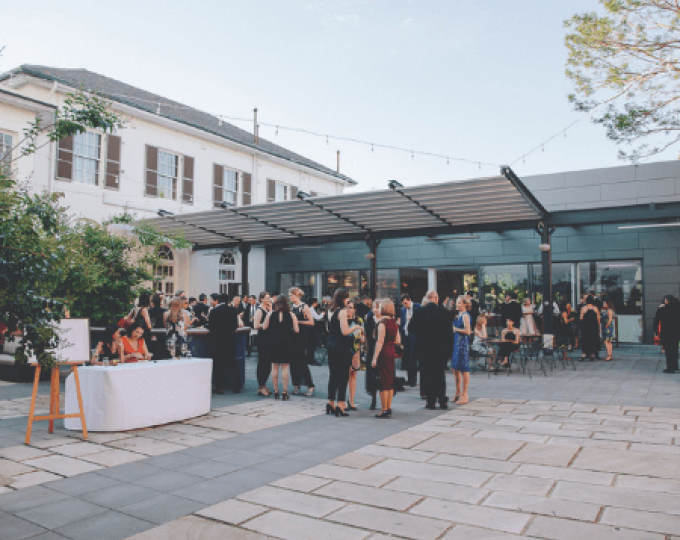 Within the beautiful grounds of the University of Sydney, our spaces are steeped in story and heritage. Insta-worthy, with lashings of character and charm. Whether you’re looking for an intimate or expansive venue, we’ve got the perfect home for your event.

I recently had my wedding at the Holme Building with the wonderful team from HostCo. They really made us feel special and added bespoke details and services that were really above and beyond our expectations. We would recommend anyone looking at a wedding venue to stop here. 11/10 is an understatement for HostCo!
Lauren & David
Thanks to the team for the great job you have done. The event went very well. Thank you and I’m looking forward to working with you again in the near future.
Amy Y
The night went very well. The assistance by the staff was never too much trouble and the food was delicious!
Stephen D
Our wedding day went so smoothly and it was the best day of our lives. HostCo, Jon and I were so impressed and thankful for all you have done on our wedding day. We give you 5 stars in excellence, professionalism, customer service, accommodating and attention to detail.
Jon & Harry
Wow, what a night! I’ve attended events at a couple of your sites now, and the character-packed venues at HostCo are still top of my list
Vina M
We recently had our wedding in the gorgeous open courtyard of The Holme Building. We were blown away by the amazing set up and hospitality of literally all the staff.
Kristy T
Everything went really well with yesterday’s event! The food was delicious and your team were extremely accommodating. Thank you so much!!
Nathan C
The HostCo team were highly accommodating, professional and attentive to every minute request. The food was incredible and super tasty and all of our guests are still raving about it. We highly recommend HostCo as a wedding caterer and wedding venue.
Loretta P
We had an events specialist with us all day to assist with anything we might have needed and the food was delicious! I can’t wait to use HostCo again for future events.
Sarah B
The night was just spectacular! An exclusive event space, divine food, and top-notch customer service. I’d use your venues again for future events.
Grace N
Amazing, both on the day, and in the lead up to the wedding. Thanks for your prompt communication, and answering our million-pronged questions.
Kimberley N
We had a blast; your service was thoughtful, impeccable and professional. The canapes and cocktails were outstanding, and I look forward to working with you again.
Iris L

Speak to One of Our Dedicated Event Specialists